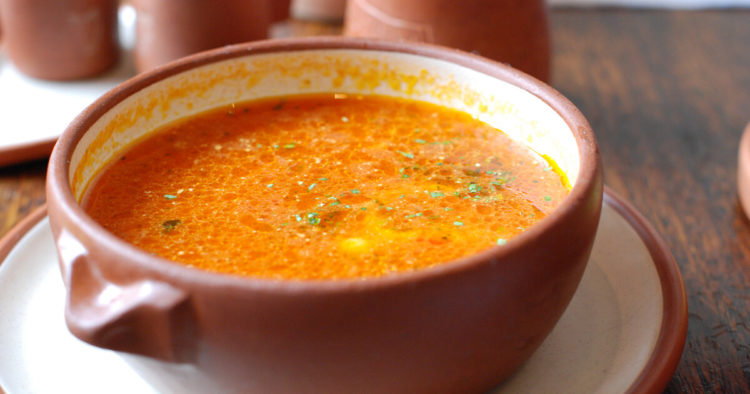 There are certain things one just doesn’t do. Stay in bed past 8 a.m., have a drink before noon, watch TV during the day, take the last piece of anything, or eat sweets for breakfast. French toast, okay, pancakes, all right, but cake? No. To everything its time and place. You wouldn’t have lasagna either. Or stew. Or soup. Garlic soup, for instance, sopa de ajo, fare of old Castile, heavy on bread, with garlic, olive oil, and paprika, a bay leaf thrown in, and made with that most basic stock, water. Even with water instead of broth, it’s rich, warm, spicy, and thick, almost gooey. Delicious. But for breakfast?

Garlic soup is traditional at Lent because of its water base. It’s also an old standard after a night of juerga, excess, because it’s easy on the stomach. Even more important though is how fortifying it is, though it’s dungeon fare, really, bread and water, expected only to keep body and soul together, like Oliver Twist’s bowl of gruel. Yet when a week of mid-winter warmth gives way to another front of arctic air, I don’t quail or shiver to find myself still in the cold dark dank hole of winter. I don’t fear imprisonment. Not when a simple dish will make the cell nearly cozy. It’s not something to force down because there’s nothing else. No. Though essentially bread and water, it’s to savor. Even more than Oliver, I sin in wanting more.

Essentially bread and water? I meant basically bread and water. Essentially it is something altogether different, something like fortitude, resistance, hunkering down, bucking up, digging in, making do, with a spicy sprinkle of zany hope. So when reading a restaurant review or looking at an ad for an eatery, I invariably think, yes, of course, no doubt the food is wonderful. But when you have the makings of wonderful in your own breadbox and kitchen faucet, why go so far afield to get it? Why spend an arm and a leg and fight city traffic? Somehow, I soon go from thinking about it to making it, and on to eating it.

And so one windy chilly morning, in the middle of winter and the middle of Lent, after having lunched on garlic soup the previous day and then having dined on it as well, I ate the leftover soup for breakfast. Finished it off, ate the very last spoonful. And then I broke another rule and licked the pot.

Clellan Coe is a writer living in Spain.