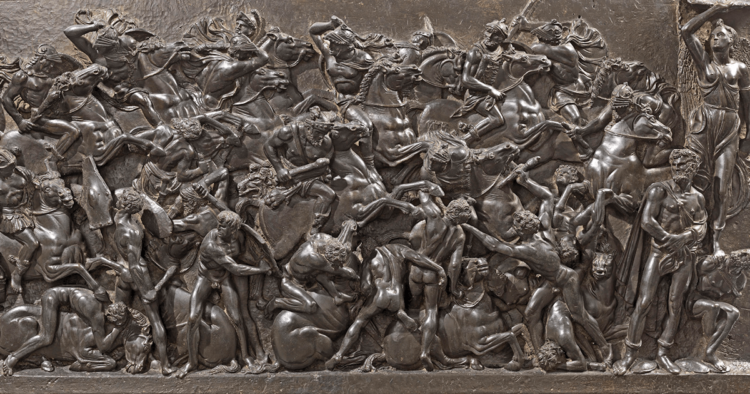 New York City’s Frick Collection famously gathers beautiful artworks in a range of sizes, from monumental wall paintings to smaller works such as Limoges enamels, medals, and miniature statues, the kinds of objects that were crafted to be held as well as seen. This tiny, intimate scale was the one at which the Florentine sculptor Bertoldo di Giovanni (c. 1440–1491) excelled. Virtually unknown today except to specialists, he was eclipsed in his own lifetime by more epic figures like his teacher Donatello, his contemporary Andrea del Verrocchio, and above all by a young man who haunted the Medici family gardens where Bertoldo served as caretaker: Michelangelo Buonarroti. Bertoldo, in other words, spent his days among some of the great masters of the Italian Renaissance, in the Florence of Lorenzo de’ Medici. The Frick, which owns one of Bertoldo’s bronze miniatures, a Shield Bearer, has now dedicated an entire exhibition, the first of its kind, to an artist who richly rewards a closer look. With quiet insistence, Bertoldo’s beguiling little masterpieces invite us to feel our way back into the texture of life in 15th-century Florence, with its bustling commerce, its vicious feuds, and the gossamer dreams its residents spun of worlds beyond their Tuscan cityscape and their daily pursuit of money.

Bertoldo cast those dreams in metal, carved them in wood, and modeled them in clay and stucco, producing Arcadian visions of gods, nymphs, and shepherds who never toiled for a living, sculpting Old Testament heroes and virtuous Christian saints, turning ordinary Florentines into knights and ladies from a mythic age of chivalry. The Frick exhibition’s big, beautifully illustrated catalog would make Bertoldo proud—except, perhaps, for Lorenz Böninger’s essay, “Housing Problems of a Renaissance Artist,” which exposes the sculptor’s repeated failure to pay the rent on real estate too grand for his earnings. Fifteenth-century Tuscans loved nothing more than a good lawsuit, and Bertoldo eventually attracted a small army of landlords who pursued him in court until Lorenzo de’ Medici, who ended up paying most of Bertoldo’s legal settlements, took him in as a familiare, a member of il Magnifico’s extensive household.