The way she flowed into that bus 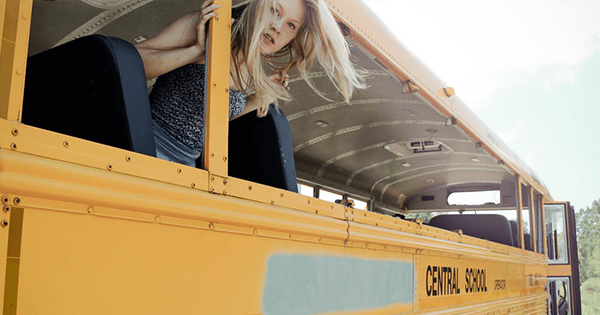 What was your biggest crush ever, Dad? asks a son, artlessly, and while you would then usually steer the conversation into aerospace engineering or beetles or the later works of Søren Kierkegaard, sometimes out pops the truth, and I say, A girl in high school with whom I never actually spoke, not once—never did I ever get words all the way out of my mouth and into her lovely ears, though I had the chance to, on a regular basis, but no, I stood there silently as she walked past in the halls, and even when she smiled and said hello to me, I stood there like a tree, a stone, a stop sign, a sheen of oil under an old car in the lot.

Almost every day of my senior year, I would manage to amazingly be in the same shadowy corner on the north side of the school where the buses lined up, so as to be in excellent position to see her board the bus, which she did elegantly and gracefully, flowing into the bus from the asphalt in one smooth motion, and she was lean and lovely and probably a decent and fascinating person, though I never managed to say the first thing to her, not hello or hey or cool shoes or do you love Twain also, or any other opening gambit that might at least have led to us being friendly and conversational and communicative, let alone more than that; but no.

As soon as she was on the bus, I was off like a shot, because I was late for practice of one sort or another, and many times one of my coaches would pull me aside after practice and lecture me tartly about being on time, and about respect for my teammates, and about respect for the coaches who were putting in their time free of charge because of their love for the game etc., and I would listen politely, and nod agreeably, and then be late again the next day, for I could not bring myself to miss the sight of her flowing into the bus, which was the most I saw of her every day; and it’s not like I could explain to an angry coach in any sensible way that I was consistently late because I had to watch a girl board a bus; that would sound silly.

I cannot, for the life of me, even remember her name; but I can very easily remember the shadowy corner of the school wall, and the constant pitter of rain that year, and the deep grumbling thundering mumbling mutter of the buses, lined up like immense disgruntled hunched yellow beasts on the north side of the school, and the shriek of the school bell, and the younger students pelting headlong for the bus, and the lazy shamble of the older students, who were sure of their reserved seats and in no hurry to achieve them; and I remember the way she flowed into the bus all in one motion, and I remember that the instant that she vanished into the maw of the bus I was away at full and furious sprint, toward practice of one sort or another; and I remember too that even as I ran I would castigate myself for not saying hello or hey or see you tomorrow or anything at all, what a dolt, what a doofus, what a doorknob I was; but I could not simmer and marinate overlong, for here comes the coach, looking grim, and I must arrange my face to be open and earnest and understanding and exactly the right amount of slightly guilty, so that he will go through the motions of barking, and I will nod in agreement, and finally he will stalk off, and I can slip happily into practice, and for the next hour forget that I am too shy and foolish to say a single word to a fellow human being my own age at my own school. No one who ever played sports ever loved practice more than me; no one.