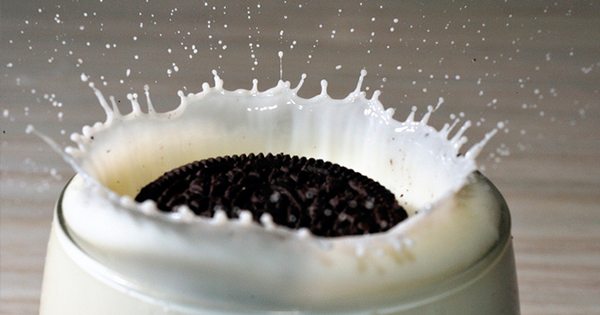 Our twin sons were recently home from college for a few weeks, and I watched with increasing amazement as they set new world and Olympic eating records daily. Out of sheer curiosity, and the journalistic urge for accurate recording, I kept notes of their gustatory activity over the weekend; come with me now into the maze of astonishment, and you and I will both gain a pound by the end of this essay.

They start late, as a rule, around noon, when they lurch out of bed. A quick snack to get the engines going—cereal or toast. Then breakfast, or first lunch, really—epic bowls of pasta, sandwiches, pears, cookies, quarts of milk and juice. Then, after bickering or basketball or running laps around the house pursued by the delighted roaring dog, second lunch, generally a sandwich or three, and chips, and cookies, and some soup and candy bars and fruit to top off. Then more fervid activity, followed by fallow sprawling in front of various flickering screens, accompanied by eating everything in sight, and also eating some things, like packets of smoked salmon and smoked almonds and baklava and pickled herring, that were not in sight, and were being saved for Christmas Eve dinner, in hidden corners of the pantry that turn out to be not so hidden after all.

By my calculation my sons are slugging down something like 8,000 calories a day, the heroic intake of professional football linemen and epic loggers and sumo champions and New Zealand rugby players, but you never saw two skinnier guys in your life, with half an ounce of fat between them. This is beyond amazing to me, not only for the patent wonder of adagio metabolisms at work right before my eyes every blessed day, but for the tremendous investment we have had to make in bread, cold cuts, mayonnaise, pasta, cheese, mustard, cookies, milk, and juice—and this is not even to think about the 90 bags of chips and such upstairs. I cannot bear to think about all the chips and pretzels upstairs. I am afraid to even open the door that leads upstairs, for fear that if I do, there will come raining down upon me such a slurry of chips and pretzels, such a cascade of carbohydrates, such a torrent of salted snack foods, that I will be pinned thereunder, and trapped for the few seconds it will take our sons to eat the avalanche. We each have our private domestic nightmares, and this, I confess, is mine.