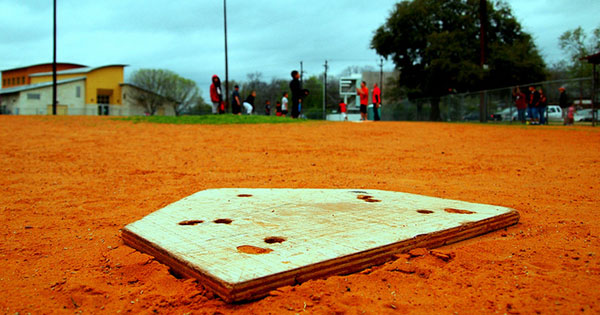 When my twin sons were young lads, I was, briefly and hilariously, their baseball coach, and it is those two bright entertaining dusty days that I wish to remember here, for they were headlong and funny, and at one point the boys got a crow into a rundown play and executed the play perfectly, which made me very proud, even though the crow finally eluded the tag by hopping into the air and flapping away disgruntled, which is something you hardly ever see, and a lovely word, disgruntled—one of those words that is what it means, you know?

I was briefly the coach because the official coach was away for the weekend, and the assistant coach was away for the weekend, and the dad who thought he was the second assistant coach was being tried for extortion or something, so I picked up the slack, at the request of the official coach, who had celebrate his wedding anniversary, even though this was the weekend of the opening jamboree, which meant four games in two days, although the games did not count in the standings, and were subject to the 10-run rule, and could be, and often were, called early on account of the umpire needing a beer, or the mothers discovering that the right fielder had strep throat, or an infestation of yellow jacket wasps, or a father being ejected on account of vulgar language, and things like that.

This was also tee ball, which is the very first rung of organized baseball in America, played by kids from the ages of four to eight, and my guys were all five and six years old, kindergarten guys, although one boy told me he was in second grade, which I do not think he was. Not one of them had ever played sandlot baseball, but several had hurriedly been given mitts by their dads and subjected to fatherly instruction as to throwing and catching, and all of them, I can say with pride, were eager to play, eager to learn, eager to run around and fall down, and nick and tip and miss and occasionally hammer the ball off the tee, and make shy ineffectual stabs at pop flies, and dive out of the way of line drives, and moon and gawk at butterflies and dragonflies and damselflies, and chase after barn swallows, and gape at a heron one time when the heron cruised slowly through the outfield, looking like a blue tent sent soaring by the wind.

I was never a baseball player myself, but I have a decent grasp of the game, being American, and we practiced hitting and fielding, and double plays and pickoff plays, and relay throws to the plate (our go-to relay was outfielder to second baseman to pitcher to first baseman to catcher, the last little hitch there because the pitcher and first baseman were twins who shared everything). They did indeed get a crow in a rundown—the crow landed near second and feinted to third, which drew an alert throw to third from the pitcher, and I laughed aloud as the play unfolded perfectly, with guys backing up guys smartly, and sharp accurate throws; it was a beautiful thing, and there was a lovely moment of pride when the crow gave up and flew away.

There was an even better time, though. In our third game, our pitcher hit a triple, and then our catcher hit a home run, which he called a fourple, and the dam broke, and the rest of that game and all through the next, all my boys tried to hit fourples and fiples and sixles, and even though the other teams’ coaches and dads got annoyed, and outlined the rules again and again, not very politely, we kept trying for fiples, and I scored the game that way for them, and I still think we had more fun than any baseball team ever. The umpire also thought it was funny, even though the other teams’ dads were barking and snarling and threatening legislative action.

When the games were done, and we were trooping off the field, a lady who was leaning on her fence watching us called to me and said she had never heard so many small boys laugh so hard in her life, which still seems like the highest possible compliment you could pay a baseball team.