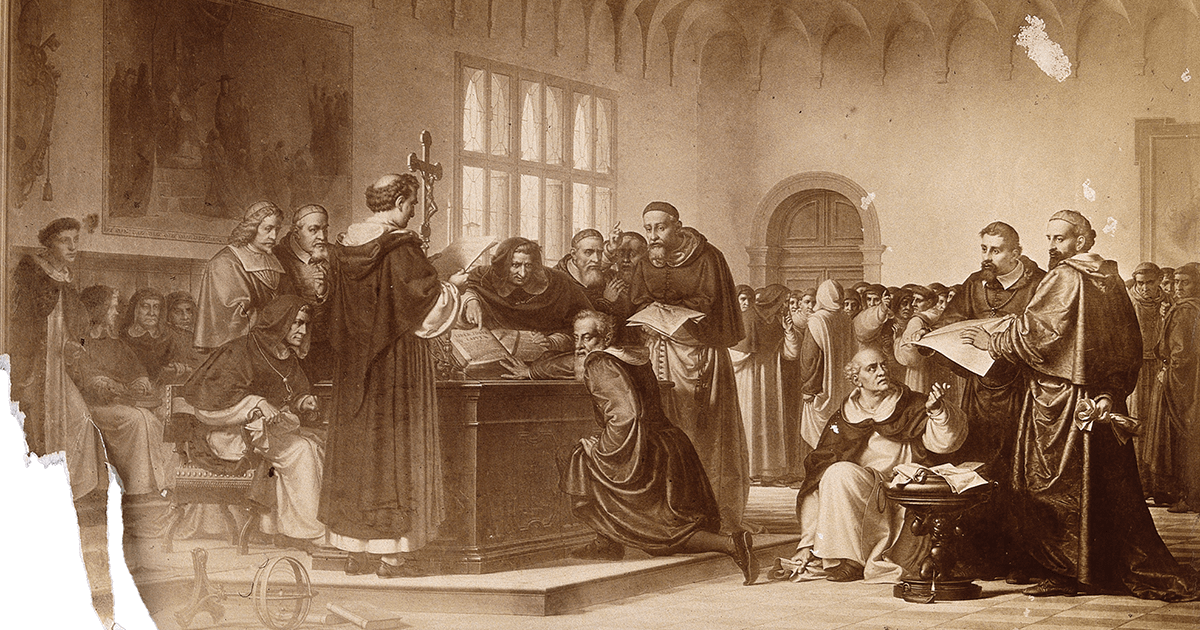 Galileo on trial at the Inquisition in Rome in 1633. A pioneering thinker, he also "could be remarkably stupid politically." (Wikimedia Commons)

Mario Livio more or less apologizes up front for writing yet another biography of Galileo. After all, hundreds of books on the physicist already exist, so what’s left to say? Still, Livio thinks that Galileo and the Science Deniers can add to the Galileo canon in three ways. And though he succeeds with two of his aims, he comes up short on the third, albeit through no fault of his own.

The first reason Livio wrote the book is that most Galileo biographies are pretty dense. There’s a lot to cover in Galileo’s life—physics, astronomy, bastard children, his spat with the Catholic Church—and it’s all set amid the wild energy of the Italian Renaissance. You can pen a thousand pages, easy. Livio, in contrast, wanted something brisk for general readers, and at just 304 pages, his book fits the bill.

Despite the brevity, Galileo comes across as a fully human character, including his faults. For one thing, he was incapable of keeping his mouth shut. He called one scientific rival a “poisonous reptile” and the “enemy not only of me but of the entire human race.” And however brilliant, he could be remarkably stupid politically, especially in his dealings with Pope Urban VIII. Urban actually supported Galileo’s teaching of the heretical heliocentric theories of Copernicus in a limited fashion, as a calculation tool, until the scientist pushed too hard. Worse, in one of his dialogues, Galileo put Urban’s own words in the mouth of a dunce named Simplicio. Many historians blame Galileo’s conviction for heresy on his mulishness and poor judgment. Livio tries to absolve Galileo of these charges, but it’s hard not to shake your head sometimes.

Livio also highlights the surprising ways in which Galileo’s artistic education informed his science. In late 1609 and early 1610, Livio writes, “Galileo probably made more earthshaking discoveries than any other person in the history of science.” The first of these came when he trained a homemade telescope on the moon.

Galileo was not the first to do so. English astronomer Thomas Harriot had studied the moon through a “perspective tube” months earlier. But whereas Harriot saw only black and white splotches on the lunar surface (a “strange spottedness”), Galileo discerned mountains and craters. This was the first evidence that, contra Aristotle, the moon was not a smooth pearl. The moon had topography.

So why did Galileo see this ruggedness when Harriot did not? Because as a young man, Galileo had studied art and knew all about chiaroscuro—the use of light and shadows to produce three-dimensional effects. Both astronomers saw the same details, but only Galileo understood what he saw. If there’s a better argument for a liberal arts education than that, I haven’t heard it.

Livio’s second aim in writing the book was to add a modern perspective to Galileo’s story. Livio works as an astrophysicist (he contributed to the Hubble Space Telescope), and he can take Galileo’s biggest achievements and show how modern science has built upon them.

In 1610, for instance, Galileo spied four unexpected specks of light orbiting Jupiter and deduced that they must be moons. These were the first new heavenly bodies discovered since antiquity. We now know that Jupiter has at least 79 moons, only 53 of which even have names. More profoundly, Galileo’s work on the phases of Venus, which waxes and wanes like our moon, provided the strongest proof yet of the Copernican vision of the Earth rotating around the sun. Livio then explains how scientists since Galileo have generalized the concept of Copernicanism. First, we removed Earth from the center of the solar system. Then we realized that the sun itself was not the center of the universe but an unremarkable star in the galactic suburbs. Now even our universe might be just one of many multiverses. At each stage, our proud little world got demoted a bit. But in exchange, we got a broader, more cosmic perspective.

The third reason Livio wrote the book was his belief that Galileo’s life is something of an allegory. “There is a striking similarity,” he says, “between some of the religious, social, economic, and cultural problems that a person in the seventeenth century had to struggle with, and those we encounter in the twenty-first century.” Galileo’s life, he believes, is a cautionary tale.

In laying out this idea, Livio walks readers through Galileo’s trial for heresy and argues that the real issue wasn’t heliocentrism per se but the intrusion of science into Church matters, especially in interpreting scripture. Livio also includes a fascinating chapter contrasting the religious views of Galileo and Einstein, as well as some admirably tolerant passages about the positive role that religion can play in people’s lives.

A decade or two ago, this might have been a worthy contribution to the ongoing science-religion wars. In 2020, it tastes a bit flat. To be sure, some fundamentalists are still teaching creationism and intelligent design, and there are still some furious atheist bloggers out there. But the larger culture has moved on. The religious right has been marginalized by the populist, nationalist right. And the great left-right cultural civil war of today revolves not around science versus religion but around (depending on your perspective) long-overdue social justice reform versus political correctness run amok. The science-religion wars have been superseded.

Livio also draws parallels to the cavalier dismissal of scientific expertise today, especially with climate change. But however urgent this might be politically, it’s a stretch to link Galileo’s story to it. Galileo and the Church were essentially having a high-level theological debate that didn’t affect anyone’s life. Climate change, meanwhile, involves the fate of the whole planet. And although politicians who deny global warming do real harm, combatting the problem requires vast structural changes; those of us who believe the science have a lot of work to do as well. In the context of a Galileo biography, the asides on climate change and “fake news” mostly just interrupt the narrative.

Still, if the parallels to modern times don’t quite land, that doesn’t take away from the book overall. It’s both breezy and insightful, a tough combo to pull off. And no matter what, Galileo is still timely because he was such an original thinker. No matter the shifting political winds, genius always remains relevant.