“I Will Die a Russian”

A marriage of convenience that yielded an intelligence bonanza 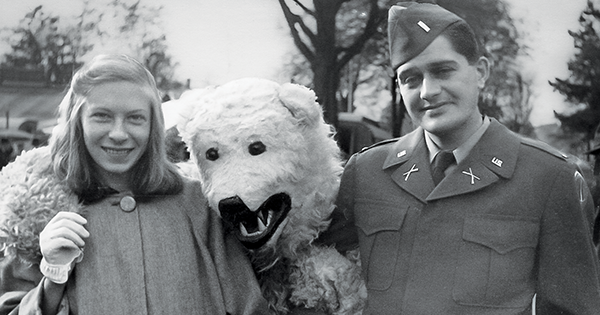 Above: Anne and Paul Dillon in Munich, November 1951. His Army uniform was part of his cover. Opposite: General Polyakov and Nina in New Delhi, circa 1974 (Courtesy Eva Dillon)

Spies in the Family: An American Spymaster, His Russian Crown Jewel, and the Friendship That Helped End the Cold War by Eva Dillon; Harper, 352 pp., $28.99

My father was a CIA covert operative. After his death, I found among his papers a sealed envelope containing articles about a Chinese newspaper editor’s arrest—a rare trace of my father’s 30-year intelligence career. During my childhood in Taiwan, I had sensed his sorrow about one of his Chinese contacts—a quaking man he’d hidden one night in our house. In my own memoir, I explored the toll my father’s work took on him, but it was only by reading Eva Dillon’s new book, Spies in the Family, that I finally understood the nature and intimacy of my father’s relationship with the man for whom he grieved.

Dillon’s memoir offers a Windexed view into the 9-to-5 of a clandestine CIA field officer—her father, Paul Dillon—and his management of foreign “assets,” people who risk their lives to give the American government secrets about their countries. Most riveting is Dillon’s portrait of Russian general Dmitri Fedorovich Polyakov, with whom her father shared a covert working relationship as Polyakov revealed secrets of “inestimable value.”

This espionage story, drawn from in-depth interviews with many of the main players, including Polyakov’s sons, is a masterly interweaving of subplots and layer upon layer of detail, which add up to a remarkable crystallization of the many forces and personalities that made up this significant chapter in Cold War foreign relations.

The Polyakov plot jolts into motion when, as a 30-year-old lieutenant colonel posted to the United Nations in New York with the GRU, the Soviet military intelligence agency, he requests a secret meeting with the CIA. He was no starry-eyed America-phile with a naïve attraction to his country’s adversary; he was a patriot, who told his American handlers, “I was born a Russian and I will die a Russian.” Nevertheless, he was fed up with Soviet hypocrisies and brutalities, and deeply concerned about a catastrophic war between the superpowers. “Polyakov was putting himself at risk so that the Americans would see Khrushchev and the Politburo for who they were, so that the United States would stand up to the Soviet’s policies and counteract them,” Dillon writes.

In 1973, Paul Dillon was posted to New Delhi, where his sole job was to manage Polyakov, now chief of the local GRU rezidentura. The two men enjoyed a warm and productive friendship. Polyakov was an avid sportsman, and since the pair often went hunting and fishing together, Paul gave the Russian a special gift: a fishing rod with a chamber for hiding clandestine information.

Theirs was a perfect marriage of convenience. As a former CIA colleague remembered of Paul, he was “relaxed and unpretentious, serious but not forbidding, and approached the job at hand with plainspoken intelligence.” The Russian wholly trusted him. “Polyakov/bourbon regularly provided photographed copies of the contents of GRU pouches coming from and going out to Moscow,” Dillon writes, “information on GRU operations and spies throughout the world, secret technical data … military and foreign policy directives.” The volume of intelligence was so prodigious, in fact, that the Agency dispatched an extra analyst to New Delhi to handle it.

Despite the treasure trove Polyakov dead-dropped into American hands, for many years his tremendous contribution remained undervalued. James Jesus Angleton, the Agency’s famously paranoid chief of counterintelligence, believed that the Soviets had devised a “monster plot,” and that any Soviet asset was suspect. The Angleton story, deftly recounted here, is a reminder of how one disturbed madman can wreak havoc in international affairs.

But it was not Angleton but Aldrich Ames who ultimately led to Polyakov’s undoing. In 1985, as division head of the CIA’s counterintelligence branch for Soviet operations, Ames accepted $50,000 from the KGB in exchange for the CIA’s crown jewels, the names of almost every active Soviet agent spying for the Americans, including Polyakov. This tragic end to Polyakov’s brilliant espionage career spoke to the moral gulf that separated him from his American counterpart: For 20 years, Polyakov risked his life, giving away Russian secrets for no reward, save the exercise of his own principles; Ames divulged American secrets to finance his fondness for Jaguars and fancy liquor.

Many more intriguing stories nest within the Polyakov tale. These include accounts of: the FBI’s contribution to the affair; the contrasting lives of the Dillon and Polyakov children; the snake pit inside the CIA; the American journalists whose exposés doomed countless Soviet assets; and the long search for the Agency mole, which in 1994 finally rooted out Ames.

Dillon’s book gets at the almost unfathomable complexity of the intelligence world and is at once heartening and distressing. On the one hand, she offers a portrait of human nobility and courage; on the other, the petty betrayal of Polyakov, who, in 1988, was executed for harming the Soviet Union when he may well have saved it. “Polyakov,” said James Woolsey, CIA director under President Clinton, “was the jewel in the crown. … What General Polyakov did for the West didn’t just help us win the Cold War, it kept the Cold War from becoming hot. Polyakov’s role was invaluable, and it was one that he played until the end—in his own words—for his country.”

Sara Mansfield Taber is the author, most recently, of Black Water and Tulips: My Mother, the Spy's Wife and Born Under an Assumed Name: The Memoir of a Cold War Spy’s Daughter. A writer and psychologist, she is also the author of  two books of literary journalism.