In the Rain by the River

All that’s missing is an ark 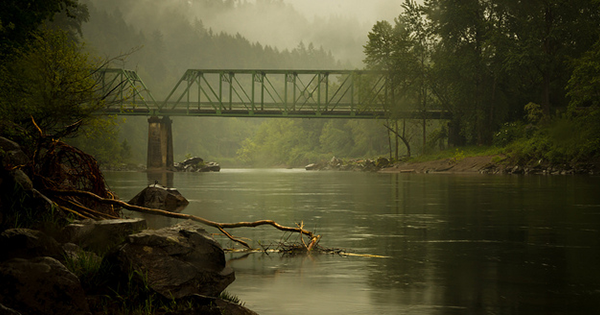 It has been raining so hard and thoroughly that the moss has moss on it. It has rained since last year, which is a remarkable sentence. Even the rain has had enough of the rain. There is so much mud that people set up tow-ropes on steep hills and haul up their fellow citizens for a surprisingly reasonable fee. Supposedly there is snow on the mountain, but no one has seen the mountain since last year. Supposedly all the rain is great for rivers this summer, but what is summer? Does anyone remember such a thing as summer? Could there ever be a time when you do not have to wear a hat? What would that feel like? Even the birds huddle and snarl in their moist nests and dank holes. The dog refuses to go outside anymore at all and now showers and shaves in rotation with everyone else in the house. Part of the front yard slumped off down the hill and washed into the river and was carried into the ocean. One child was stuck in the mud for an hour yesterday before we winched him out using both cars at once. A family of bedraggled raccoons has been leaving plaintive notes in the mailbox. Slugs have congregated in the basement and established a new religion complete with tithing expectations and plans for expansion into Latin American markets. Mold is now listed in the stock exchange. So much mud has washed into the river that a new phalanx of low islands exists where the river meets the sea. There is so much mud in the river that salmon have taken to walking to their natal pools and redds. I did not ever expect to see large salmon, some as long as your leg, sliding headlong along muddy trails in the river as if they were small children loosed from school because of sudden snowfall, but indeed I have seen this, just this morning, and I was struck by the way that the salmon were so carefree and exuberant and giddy about the whole adventure, as if they were not intent on reproductive duties and responsibilities. But then perhaps it was the utter absence of fishermen and fisherwomen that had something to do with their ebullient play. Neither did I see a single osprey or otter or seal or sea lion, though I did notice one soaked and shivering mink, huddled inside a throng of upturned beach chairs on a jetty; he too was staring out yearningly at the salmon sliding merrily on the mud, in little groups of three and four, the bigger ones sometimes joining forces to whiz the little ones upriver at a terrific clip, the little ones laughing so hard at this that occasionally one would get the hiccups and have to stop to get his or her breath back. Twice I saw large salmon solicitously bend over smaller ones that had hiccups, and once I saw a large salmon gently but firmly clap the smaller one on the back to dissuade or dislodge hiccups. This is not something I ever expected to see, but that is what I saw this morning in the rain by the river.