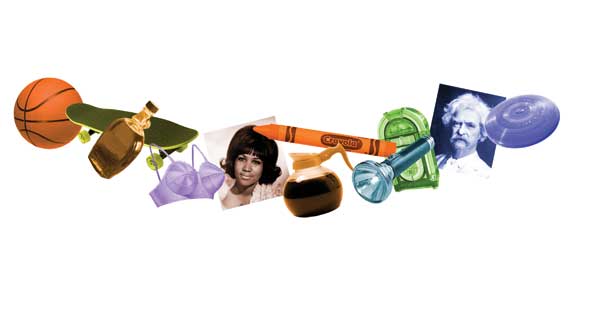 Is that an American story or what?

We also invented the weekend (in 1908), the Ferris wheel (named for George Washington Gale Ferris Jr.), electric guitars, bifocals, skateboards, potato chips, and the Crayola crayon, which also cheers me up, although it also reminds me of the time the dog ate a box of 64 crayons and some hours later I saw colors I never saw before or since.

Yet we also invented napalm, the nuclear warhead, reality television, bazookas, the neutron bomb, and the Taser (an acronym for Thomas A. Swift’s electric rifle). Gazing at the long list of weaponry that was imagined, designed, and manufactured here, I wonder whether I should be proud that our inventiveness saved millions of lives, or horrified that our inventiveness directly ended so many others. I think of my father, who served during not one but two American wars, who says that dropping the atom bomb was an unspeakable horror and an event that saved millions of lives. Both things are true at once, he says, and who will gainsay a former U.S. Army lieutenant who would have been in the force that invaded Japan? Not me.

We invented the airplane, moon rovers, the jukebox, paperclips, the Web, the first two artificial heart valves (the second, I happen to know, was invented when an engineer named Donald Shiley was watching a football game; he told me that the radical design of the thing suddenly popped into his head, and he leapt up from his chair and ran to sketch the idea before he lost it). We invented dental floss, email, the flashlight, the refrigerator, the optical mouse that allows paralyzed people to write novels, and the zipper, which along with the hot shower (inventor unknown) may be the greatest invention ever.

But we also invented many things that are both amazing and awful, like monster trucks and video games and slot machines, and then we invented such ingenious terrifying things as the electric chair. This last is another classic bit of Americana: A dentist named Alfred Southwick first had the idea of shooting electricity through a man to kill him, and being a dentist, he of course envisioned a chair in which the victim would be restrained. Two of Thomas Edison’s employees, Harold Brown and Arthur Kennelly, are credited with actually building the first such infernal machine.

I grow dark thinking of how creativity and inspiration are so easily turned to blood and harrowed survivors; will there never be a world where our wit and flashes of insight are turned only to remarkable ways to clean water and air and soil, to intricately layered political solutions that allow for national and ethnic and religious and clannish pride channeled into food and education rather than war and rape? Will we go another century or two before we invent ways to explore and reside among the stars? Are we really, for all the inarguable brilliance of our species, our incredible predilection for imagination, our endlessly dexterous fingers, doomed to choke to death in a crowded, hot, spoiled world?

Most days I think not; and most days what cheers me right up again, what brings back the light, is a long and happy contemplation of the sports we invented here in these United States of America. We invented volleyball, ultimate Frisbee, stickball, Wiffle ball, and Hawaiian lava sledding, which entails surfing on rock, which is madness. And we invented baseball, though that is clearly the child of cricket; and we invented our brand of football, though that is clearly the child of rugby; but most of all, best of all, in 1891 we invented basketball, the most generous and quicksilver of all sports, with all due respect to such other excellent candidates for that title as soccer and Australian football.

I hear the shouted objection that basketball, glorious and unparalleled basketball, was invented by a Canadian, the sainted Dr. James Naismith, and though I respect your attention to biographical detail, I note that the good doctor invented the game in Springfield, Massachusetts, and that he was, at the time, earning a salary in good American dollars from the Young Men’s Christian Association to be inventive on their behalf. So, objection overruled.

A sport in which all players are on the move all the time; a sport in which the ball democratically touches all hands on almost every play; a sport in which size and brawn are by no means the arbiters of excellence, and deviousness and quickness and sleight of hand and creative thinking are trumps; a sport in which points are scored profligately (unlike soccer) and violence is not the point of the game (unlike football) and no player on the field of play ever spits tobacco juice or scratches his private parts (unlike baseball): is that an American sport or what?

And when I must dip deepest to slake my thirst for hope and delight and pride in my nation’s imaginativeness, there is our music. We invented the blues. We invented jazz. We invented soul. We invented Ella Fitzgerald. We invented gospel. We invented rap and hip-hop. We invented Duke Ellington and George Gershwin and Brian Wilson. We probably invented punk music, although perhaps we should blame that on England. I could say, with some legitimacy, and with great respect for the classical canon and for religious hymns and for the many wild and lovely forms of music invented in other countries—for example, my beloved bossa nova—that most of the coolest forms of music ever invented were invented in the
United States of America. That is a remarkable thing to say, and I will stand by it, while cheerfully jacking up the volume on my radio to drown out the shrieking of those who disagree, poor creatures. To quiet their shrill imprecations, I do believe I will play some Sarah Vaughan or Bruce Springsteen or, finally, if there is still a burble of unrest, Miss Aretha Louise Franklin, of Memphis, Tennessee, whose parents were a preacher and a piano player, and how American is that?