Maia Cruz Palileo is a Brooklyn-based painter and sculptor. Born in Chicago to immigrant parents, she moved to New York to become an artist in 2001. Her work focuses on themes of migration, generational gaps, and the American experience.

“My parents moved here from Manila in the early ’70s. In my work, I started focusing on that decade when my parents moved to the States. I was imagining what it was like for them as fresh immigrants in the middle of Ohio. I wondered if they felt like visitors in a new land or if they felt at home, and what their feelings were about being here. They didn’t talk about it very much. That’s the other thing that motivated my work: what they didn’t tell us—reasons why they left, the stories that they didn’t want us to know. Those are some of the things that I’m now starting to ask my dad.

I was working from my parents’ family archives. There were pictures of them with their first car and house. Carillon Woods, in parentheses says, ‘This is our house’; that was the caption on the back of a photograph. I was Xeroxing those photographs until they were very faded, then I would collage those Xeroxes and use them as a skeleton, and infuse it with color. Those old ’70s pictures had this very specific feeling, but I also infused them with my memories of the Midwestern landscape. 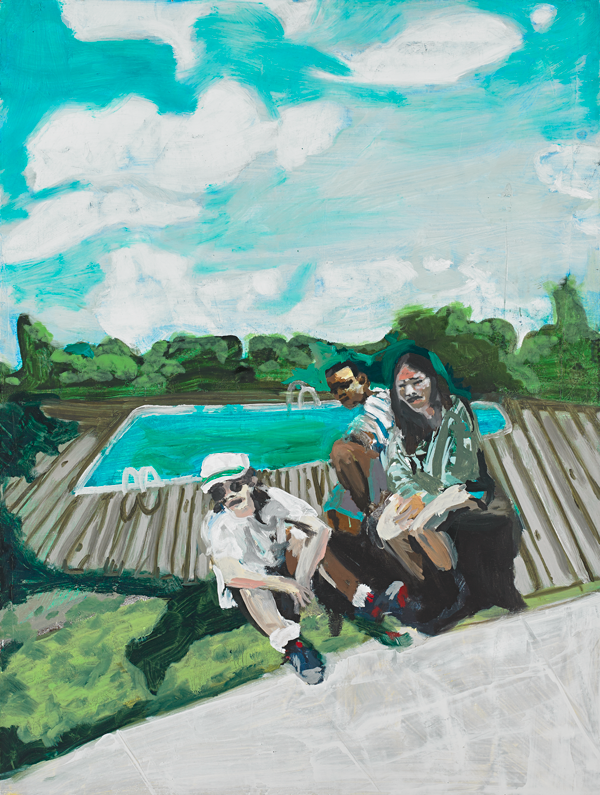 I left the Midwest when I went to college, and then I didn’t ever come back. I thought I would, but I never did. I have a haunted relationship with the Midwest because when I was 19 years old, my mom passed away suddenly. Then everybody moved, and we no longer had our home there. Partly, this comes up in the paintings because it’s a very charged memory. The midwestern sky is what pops out for me when I have memories of the Midwest. I don’t know if it’s because now I don’t get to see big open sky. It’s all about the sky and storms, and the colors of those are a little bit different; they’re a little bit purpley and orange and greenish.

And similarly, Poolside Kids is about when I was a teenager growing up in suburban Chicago. It was mostly just that landscape that made me want to paint this painting. We had a suburban summer life style. In this painting, we’re at the community pool, waiting for a ride—there was a lot of waiting. I was rebellious, did drugs, hung out in diners, smoked cigarettes, and went out into the woods to get high. The painting, too, is about the idleness of that and the boredom, and a sense of isolation. And yet there’s a longing for that as well. Now, I don’t wish I was a teenager again, but there’s a longing for it.”