The priest’s last words to a nervous groom 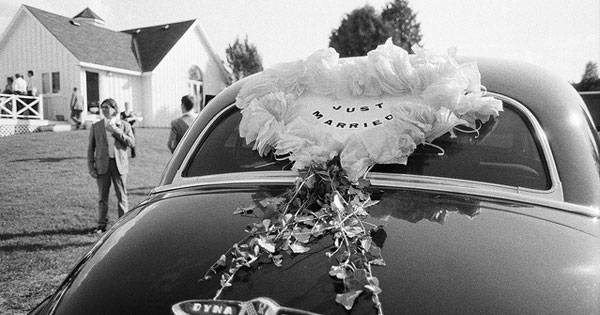 The first face I saw on my wedding day was the grinning devious mustachioed face of the priest who would, six hours later, conduct my marriage to my admirable bride, who was so glowingly beautiful that day that both the men and the women in the wedding party wore sunglasses at the altar. My priest woke me up by tapping a cigarette on my forehead and mumbling, Let’s go, Bozo. Many men remember the first words they heard on their glorious and unforgettable wedding day, but I do not believe any other man ever heard those particular words. This was at dawn. We dressed in our uniforms for the day, he in black and I in white. I was supposed to wear a bow-tie but had not the faintest idea how to tie the thing and neither did the priest and we stood there staring at it until the priest, smoking his second cigarette of the morning, said, Screw it, let’s get some coffee.

Down the street we went to a coffee shop. He lit a cigarette, and we drank a pot of coffee slowly without saying anything. Do we need to have any last talk about anything? he said, and I said, No, I was sure she was the girl for me, and in fact my only serious question was whether I was a good enough man for her. And the priest said, Well, that’s the right question to ask, you’re ready, and then we lapsed into silence again. The waitress asked us if we wanted to eat, and the priest said, My friend here is getting married at noon and he will not eat because he’s nervous and also fasting has a spiritual component that adds a little excellent flourish to the day, so nothing for him, and as for me what I would like is a steak and a double bourbon, no ice, but that’s probably not such a good idea just yet, so just more coffee, please. We sat for a while reading the newspapers and sipping coffee as he smoked his fourth cigarette, and then he said, You ready? And I said, I guess so, and we went to the church.

In the sacristy of the church he said to me, Listen, I know I am supposed to give you some last wise spiritual advice, but my only advice is you marry that girl or else I will leave the priesthood and marry her tomorrow. There’s only one woman like that in a generation, and God knows why you were chosen for such a gift but that appears to be the case. It could be that she’s nuts, but I don’t think so. Don’t ever take her for granted. Any questions? No? Let’s go.

At the door of the sacristy, where it led onto the altar, he paused and put out his fifth cigarette in an ashtray affixed to the wall for just this purpose and said, Come here and stand with me a minute, which I did, and together we stood in the doorway and gazed out at the church, which was, amazingly, packed with people. Remember this scene, man, said the priest. You remember this when things are dark. All these people are here for you. There will come tough times, and you remember these people here today. They’re here because they are the ones you call when things are hard. Are you paying attention? Look at them all. Half of them love you and the other half envy you, as well they should. What a woman. How in God’s name you were chosen for such a gift is a mystery to me. God works in mysterious ways. Part of the reason I became a priest. The mystery is riveting. Rather like marriage. Any last questions? Speak clearly and firmly when I ask you the questions, and do not mumble. A woman like that wants to marry you, you damn well shout your assent. Make them hear you in the last pew, man. We clear on that? Ready? Let’s go. And we went.