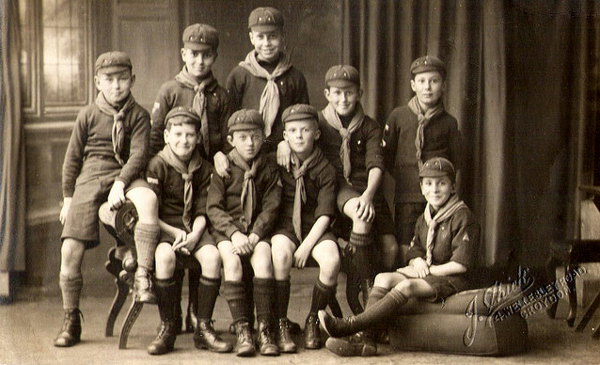 On my way to Seattle the other day, the train stopped for a few moments at the city of Tukwila, because of “a number of farm animals on or near the tracks ahead,” as the conductor said precisely. A few passengers took the opportunity to step onto the station platform and stretch and smoke. I stepped out to stretch my legs, and got into a conversation with a man and his young son who were leaving the train at Tukwila. The father was wearing a green Boy Scout uniform complete with a wonderful battered worn old stained campaign hat that clearly had seen many a rainstorm and been smoked by many a campfire. The son was wearing a blue Cub Scout cap with a bear logo on it, which made me remember that Cub Scouts begin as Bobcats and then rise to, in order, Tigers, Wolves, and Bears; the lad in front of me, then, was about age nine, and an accomplished scout, if his hat could be believed.

The son was shy and said very little, but his father was a gregarious soul who soon proved to be an eloquent one as well. I told him that I had once been a scout, albeit a poor one, but that my brothers had been avid scouts, to whom scouting was the door to lives of reverence for wild things and wild places, and the father said, Well, that’s what I hope, more than anything else, for the boy. I think scouting is finally about reverence. It teaches you to pay attention. It reminds you that we are surrounded by wonders. I don’t think you can be a really avid scout without becoming ferocious about the wonder of living things, from trees to bushes to animals to people. Some people think we are militaristic, or political, or frightened of social change, but I know hundreds of scouts, and almost all of them are good people who invest an enormous amount of time and energy into helping boys learn some skills, and woodcraft, and respect for the green and rocky world outside towns and cities. Plus kids get to belong to a club, a team, a sort of peaceful gang, in which you have to work to rise in rank. The work’s important. My boy is real proud of being a Bear. He did all the work for that himself. He hardly ever even asked me for help. His mom and I were real happy about that. He’s got to learn independence of mind, and it’s moving to me that he’s already developed avid interests of his own.

Are there bad apples in the scouts? he continued. You bet there are. Just like in religions and families and companies and countries. But you do your best to find them and root them out. You do your best to listen to kids and protect them and give them the confidence and courage to protect themselves and their friends. I don’t think there’s anything more important in scouts than protecting kids. Everything else is 10th. And we’re growing up as an organization. Change has been great, actually. I think being forced to be honest about things and change to be more open has been great for us. It probably saved us from fading away. You can’t help but be a conservationist as a scout. You notice fouled water and land more. You get angrier about it. We spend a lot of hours cleaning up our area. We do what we can. The kids are great at calling adults to account, too. I’m proud of my boys that way especially. Who could argue with or ignore or demonize Cub Scouts who ask politely about illegal discharge pipes into a creek?

I asked him what his best moments had been. In the woods, he said. These are town kids, and most of them would never get out into the woods and the mountains without scouting. But there are incredible woods and mountains here, rainforests, glaciers, remote lakes, a seacoast, cougars, bears, whales, sea lions … you should see my boys the first time they see whales spouting, or the first time they see fresh deer tracks. Talk about astonishment. Plus they earned the sighting, you know? They hiked the trail, they pitched the tent, they built the fire. Lot to be said for that. I’ll be a scout leader until I can’t walk anymore, I hope. And I hope the boy introduces his kids to scouting. It’s a great idea and it’s more important than ever, I think. No one thinks about scouts as agents of wonder and reverence, as defenders of the natural world, but I do. I sure do.

Just then the conductor called passengers back onto the train, and I had to go, but I shook hands with the man, and then with his son, and wished them the best, and the rest of the way to Seattle I thought about what he said, that no one thinks about scouts as agents of wonder and reverence, as defenders of the natural world; but he did, and I do, and now perhaps you do too.