What if sporting encounters really were life and death? 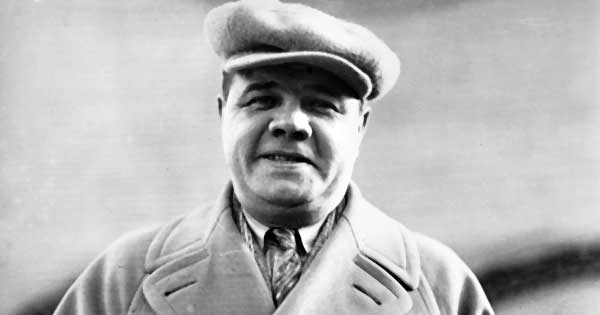 Photo by Frank Sterrett for The Oregonian, courtesy of his grandson John Furey

Let us ponder, on this off day before Game 3 of the World Series, the amazing fact that the greatest baseball player ever, in the sport that for many years was the favorite and beloved and characteristic sport of this nation, a sport we invented (although clearly riffing on cricket), was the man shown above, a man who ate too much, drank too much, smoked too much, conducted many wanton and careless affairs of the heart, razzed the president of the United States in national newspapers, and could easily have been a street thug had he not been taught the rudiments of a game. Thoughts:

—Boy, games are a great idea. Could it be that games and sports are deft and subtle evolutionary engines, in that they stylize war, channel violent and aggressive and competitive impulses, and offer venues of activity and economic and social mobility— while providing an endless supply of dramatic and sometimes amazing theatrical narratives for promulgation for sale and entertainment on media invented and to be invented?

—If baseball is no longer the national pastime, and football, its ostensible successor, must now inevitably morph as its keepers are forced finally to admit that many who play it lose brain matter, and hockey isn’t going to be our national sport, partly because we love our teeth, and soccer will never be our national sport because we like games where players actually score more than once a week, does that mean that basketball is now our national sport, and the Babe Ruth of our new national sport is a very tall black man, given that the few choices for greatest player ever are Bill Russell or Michael Jordan or perhaps someday Mr. LeBron Raymone James?

—What if all national, ethnic, religious, and political conflicts could be ultimately settled by sporting contests, in some cases between the leaders of the opposing entities? Wouldn’t that lead to a lot less murder? What if instead of bloviating and posturing and posing and preening and expostulating and stirring up murderous ferment, leaders had to go one-on-one on the hardwood, tennis court, or track? Wouldn’t that be better? Good thing we invented basketball, I say, nationalistically.