The End of History? 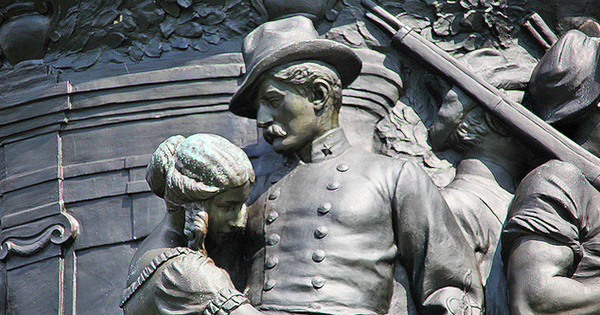 With the lowering of the Confederate battle flag in South Carolina and elsewhere, some diehards still insist that the banner had nothing to do with race, that it was just a symbol of their Southern heritage. Other Americans long offended by the Confederate monuments that stand all across Dixie are urging that those memorials come down along with the flag. Still others clarify the matter in three words: black lives matter, spray-painted on monuments north and south. Somewhere amid all this, I am trying to place myself.

So far, the debate lacks nuance. It seems simple: the Confederate States of America existed to preserve slavery, so anything honoring its memory should be erased from modern America. But before we send out the wrecking ball, let’s do nuance: Where do we start, and where do we stop?

What about statues that were cast to mourn for the dead, erected not by the Ku Klux Klan or its descendants, but by grieving widows? Should those in graveyards be allowed to stand? What about the memorial in Green Hill Cemetery in my hometown, Danville, Virginia? It’s a tall obelisk erected in 1878 by the Ladies Memorial Association, standing in what is today a mostly black neighborhood. It’s a monument to the dead, but it’s by no means neutral. It features bas-reliefs of Robert E. Lee and Stonewall Jackson, and says,

Patriots! Know that these fell in the effort to establish just government and perpetuate Constitutional Liberty. Who thus die, will live in lofty example.

If it should go, what about the simple government-issued headstone nearby, which identifies my Civil War great-grandfather as “1st Sgt Co I 53rd Va Infantry,” and thousands of others like it?

What about Monument Avenue in Richmond, with its grand likenesses of Lee, Jackson, Jefferson Davis, J. E. B. Stuart, Matthew Fontaine Maury? Might we differentiate between fiery politicians such as Davis, who wasn’t even a Virginian, and the generals they dragged into war? If the generals should go, then what about the privates who marched because their neighbors did, defending slavery even though they never owned a slave? What about the statues of Confederate soldiers standing before hundreds of county courthouses? Most face north defiantly, muskets at the ready. But others, like the one facing south in the center of Alexandria, Virginia, are unarmed, hats off, heads bowed, clearly mourning fallen comrades. Shall we appoint committees to decide what each sculptor was thinking? You’re right: this could get silly.

But suppose we did decide to tear those down—what about all the other reminders of our shameful past? Mount Vernon, Monticello, Montpelier, and the other homes of our slave-owning presidents? What about the statues of Confederate soldiers on every Civil War battlefield site?

To take down every offensive monument in the South willy-nilly reminds me of the wholesale de-Stalinization campaign that I witnessed in the old Soviet Union, and the destruction of ancient monuments by ISIS and Taliban fanatics today. Totalitarian states may decree that the painful past never happened, but any such official effort in our country, even one executed selectively, would be tragic.

Saying all this, and considering my ancestors, I might be shrugged off as just another rearguard Rebel. I qualify four times over for membership in the Sons of Confederate Veterans, vigorous defenders of their heritage and its symbols. Because I’d written Civil War history, I was invited about 20 years ago to speak to the SCV camp in Alexandria. In my talk, I recalled my great-grandfather who died of smallpox in the Yankee prison at Fort Delaware, and the three others who were wounded later in the war. The Sons were impressed. And then I told them that the Confederate battle flag was a provocation that should be retired to the museum. I haven’t been invited back.

The punch line of that talk was a pale version of everything I’ve said and written about race and racism since I did my first column for the late, lamented Danville Commercial Appeal at the age of 18. Yet, because I remain concerned that I might be misunderstood when I suggest going slow in the current debate, I’ve let others say what I’ve been thinking.

Mayor Stephanie Rawlings-Blake of Baltimore, with hard-earned experience trying to cool public anger, has wisely punted these matters by naming a committee to dig into the issue and stir public dialogue. Roger Davidson Jr., a professor at Baltimore’s Coppin State University—who, like the mayor, is African American—thinks that demolishing the monuments would be “horrible” because they can be teaching tools about a chapter still misunderstood by too many people.

New York Times editorialist Brent Staples, who has written eloquently about growing up black, strongly supports removing statues of villains like Confederate general Nathan Bedford Forrest, who was a postwar organizer of the Klan. Such efforts are not “bad-faith attempts to rewrite history,” he says, but reflections on “how to honor history … and rightly deciding that some figures who were enshrined as heroes in the past do not deserve to be valorized in public places.”

Interesting that Staples says “some figures,” which may suggest just the most egregious offenders, or just Confederates. But neither he nor the mayor nor the professor nor I want to start bulldozing without serious “reflections on how to honor history.” For me, that should mean enshrining other heroes at least as conspicuously as the ones who now stir such passions.

Imagine Martin Luther King Jr. standing tall in the capital of every state in the old Confederacy, indeed the whole Union … Move Arthur Ashe’s token memorial off Monument Avenue and put a grander one on the broad Boulevard nearby, renaming it Ashe Boulevard. Along it, raise Powhatan Beaty, Decatur Dorsey, and Edward Ratcliff, who fled slavery in Virginia to join the U.S. Colored Troops and won the Medal of Honor fighting for freedom … Erect Thurgood Marshall, Sojourner Truth, Frederick Douglass, Medgar Evers, Crispus Attucks, A. Philip Randolph, Dred Scott, Rosa Parks, Harriet Tubman … The list stretches from 1619 into tomorrow.

If we’re going to honor our history, let us honor all of it.