If you want a thaw, go west, young man 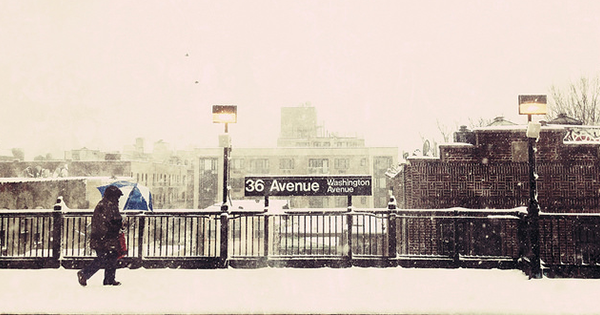 I can never remember whether it snowed for six days and six nights when I was 12, or whether it snowed for 12 years in a row, thoroughly, insistently, steadily, relentlessly, all day every day, even on Saturdays, when I was between the ages of six and 18, at which point I went away to college, choosing, of all places, Indiana, where it has snowed every day since the 19th century, and women occasionally marry snowmen, and ice-blocks have long since supplanted corn and soybeans and basketball players as the state’s leading export.

I remember the day it began to snow, in our bucolic neighborhood in New York; the muggers were startled, and the police were suspicious that New Jersey was somehow responsible, and the city changed its parking rules so that now you could only park on the east side of the street on Wednesday mornings for any six minutes during lauds, and then again for any six minutes during vespers, except on days in which the letter y appeared in the name of the day, in common usage, such usage being defined by the borough president, the Honorable Joseph Periconi, who was a Republican, but no one held it against him, particularly.

At first the snow was sweet and surprising and lovely, drifting and whirling and swirling in entertaining eddies, landing entertainingly on the eyelashes of all alike, and discombobulating dogs, who could not figure out how to eat or mate with it, and totally weirding out the neighborhood cats, who, upon feeling the caress of snowflakes, would achieve their most manic and psychotic state, screeching and wailing in tones like Yankee fans when their team has won a game by only 10 runs, and not the 80 they have come to expect; but then the snow began to stick, and pile up, and drift in the most interesting billows and tides, so that the Lutheran church vanished, and the Jewish temple vanished, and even the church of the Saint Thomas Christians vanished, and that is a fascinating church, tracing its origins to the legend that Saint Thomas wandered all the way to India after the death of his friend Jesus the Christ outside Jerusalem.

For a few days the snow was fun, and there were snowball fights and swimming races and bicycle races in slow motion, and the building of ice trails on which to race whining younger brothers, but then the whole thing went from powdery wonder to onerous infliction, and there it stayed until I went to college. I should say here that I contemplated colleges in upstate New York, because I thought I might be able to play basketball there, until my father, a wry and honest man, said gently that his considered opinion was that I would be able to play college basketball only at colleges that enrolled 12 or fewer young men in toto, and as there were not so many of those colleges, that we could find, perhaps I would be advised to delay my college basketball career, and either use my eligibility later, when I did find a college with a male enrollment of 12 or under, or go directly from college into a professional basketball career, if I could find a professional league that was restricted only to men 70 inches tall, with long bedraggled ponytails and dense eyeglasses with black plastic frames so incredibly thick that they looked very much like someone had carefully carved ebony fence posts into eyeglass frames, which would be a remarkable bit of carving, and no mistake.

So I went off to college in Indiana, where even more snow fell than in New York, and then I moved to Chicago, where more snow fell than in Indiana, and now I live in Oregon, where it snowed two years ago, for two hours, for a total of about two inches, and the state shut down for days, and church attendance rose, especially at churches having to do with Saint Thomas Christians, which is a fascinating faith tradition altogether, it seems to me.