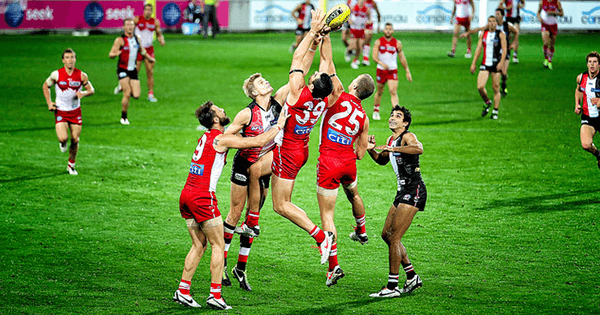 The game is two hours long. It has its own vocabulary. There are rovers and ruckmen and wings and back-pockets. The field is oval and yearning and green and vast and shining. The fans sang and chanted and roared and laughed and hammered their feet upon the steel planks of the stadium. The fans wore red for one team and blue for another. The ball is oblong and goes any which way it wants. The feeling in the air was ancient with blood and joy and the players are incarnations and avatars of a very old thing for which I cannot find a word—it is composed equally of danger and delight. Even little children were shouting. There was a great deal of clan in it. I stared with fascination. There is hunting and killing in it. There is war in it. The war is shaped and trammeled and regulated, but here and there it bursts out snarling and the crowd roars with something riveting and frightening at the same time. A man near me was shouting so angrily that I saw spittle on his chin. At one crucial point the stadium shook noticeably, and I could not hear the man next to me, even when he leaned into my ear and shouted something happily. One player gestured at the crowd after scoring and the crowd stood and roared and it seemed to me that he conducted the roars with his hands in such a way that he and the crowd were doing something ancient and magical together. We hardly ever look under sports for that which has been there for many many thousands of years. It is a dance and a song and a battle and a mob and a play. It is theater in which one tribe vanquishes another. We are obsessed with sacrament and ritual and slaughter and sacrifice. We choose among our young and pit them against the others. We brandish the banners and shields of our tribe and excoriate those of the others. We must have others so as to be ourselves. When we win we sing and chant and laugh and remember, and the tales go on for years and years. We anoint heroes and hound villains. We cut out scapegoats and pillory them and banish them and spit on them and we love doing so with every iota of our being. We name our tribes for powerful animals and powerful machines. There is an intermission during which the crowd stretches and drinks beer and tells jokes and greets neighbors. There are high tides and ebb tides in so many human pursuits and endeavors. For a moment the field is empty, and it looks eerily like a lake or a bay. The wind picks up and flags are snapping and flags and pennants are also ancient beyond history as the marks of tribes at war. We wear our colors and signs and devices and excoriate those of the others. We are so hungry for others. In the second half, one team slowly pulls away from the other. The team that is losing the battle grows violent and penalties are exacted by judges who wear a distinctive color. There is a rule called the blood rule in this game whereby a player who is bleeding must leave the field until all evidence of his bleeding has been expunged. When he is clean and shining he may return to the field of battle. The players grow weary and the crowd grows weary and the game ends and the fans sing along with the players who stand shoulder to shoulder as they sing. Some of the players drape their arms around the shoulders of their companions. Finally the fans file out in knots and gaggles, and I sit in the empty stadium and stare at the field. In the stands men and women and boys and girls are cleaning litter and trash. I have been in theaters and waited until everyone has left and someone always comes out of the wings to clean the stage and put away the props and rearrange the seating for the next show. We love to invent ways to tell ourselves stories of how and who we are. We are so much older than we admit. The last player in the line of players leaving the field paused and looked up into the crowd and placed his hand on his chest in an ancient gesture of respect, and hundreds of fans, I noticed, did the same thing, without a word, which I thought was a lovely thing, an unforgettable thing, a very old and beautiful thing.