The Old Sneakers With Which We Mow the Lawn 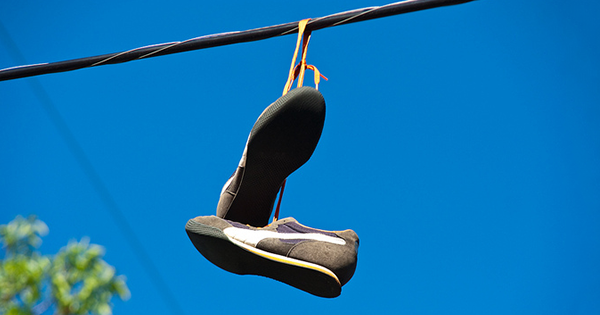 Used to belong to me, I think; but that was so long ago that we are not sure about this. They maybe have been here before we were; for 40 years, the house was occupied by a tiny old woman who could not fight the blackberries, and once a year the fathers in the neighborhood would come and cut away the vines reaching for the doors and windows. Or perhaps the sneakers were here before the house itself, as the first loggers’ rough cabins were built, or the seasonal shelters of the Clackamas people passing through after deer and berries and salmon.

Certainly the sneakers are old enough. They have lost their logo. They have lost their laces. They have lost their traction. You can, if you want to, slide over wet grass with them as if you were wearing battered old canvas skates on the greenest of ice. They were perhaps once white but now they are all sorts of gray and green and muddy and russet. I am going to guess that they have been the shoes of choice for more than 100 lawn-editing projects. They know the place where the grass ripples over rocks. They know where the black bees held their furious councils. They know the wasp nests and the wren nests and the place where one time there were baby rabbits. They know the white cedars that every year miraculously produce a herd of pebbles. They know where the ivy advances every year, and they know the growling pleasure the mower takes in shredding the ivy. They know the dips and swells and pits and dingles where the dog has conducted his mysterious archaeological revels. They know the spot where the two big boar raccoons savagely fought one night while we watched fascinated from the front window. They know where we have buried various small family pets with crosses of sticks and one time a tiny bell. They know the land around us better than we do, its moist and mud and grain and gravel, its patches of tiny blue flowers, its yearning to revert to arum and blackberry and locust saplings. They know the lovers’ lanes of slugs and snails and snakes. They know the shards of bricks and splinters of wood and scraps of plastic scattered in the yard by 90 years of residents in this house and perhaps thousands of years of residents and transients before us.

They know what we do not know, is what I am trying to say. We say they are just sneakers, and old battered soiled ragged unlaced sneakers at that, but when I see them perched on the back stairs after being used once again by a son to mow the lawn I get a faint hint of their experience, their subtle knowledge, their unaccountable travels, and this is not even to explore their own youth when they scuffed basketball courts and shuffled through sand and sea-rocket at the beach.

Just sneakers, and old battered stained ones at that; but they have cupped the feet of those I love, as my sons worked however briefly on behalf of their mother’s sense of order and for their father’s small stipend for work well done; and so they seem more than sneakers, somehow, old and battered as they are. So many objects are bigger than their composition, bigger than their heft, bigger than their excellence or lack thereof at the task for which they were designed, and sold, and purchased; so this morning, a quiet song for old battered shoes, which serve us well, and carry remarkable memories, and did hold, in quite real ways, love.