The anxieties and joys of 8:51 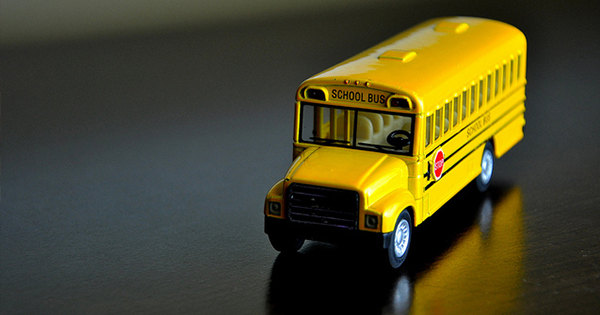 In the newspaper this morning there is The School Bus Schedule for Elementary Schools, a full page, and from old habit I search out our morning and afternoon bus routes, and I find myself starting to weep for murky reasons, for instantly there we all are again at the corner of Ash and Laurel Streets, at 8:51 in the morning, with many other small burbling children and several parents and even one set of grandparents who are raising the two girls, and the kids jostle and rustle and bump backpacks and edge each other into the street, and the dads bark, Get outta the street!, and the mothers chat equably, and there are two dogs sniffing each others’ private parts for coded messages, and here comes the bus! The kids trundle and waddle onto the bus, the little kids sitting in front and the older ones in the rear, in the ancient tradition, and the bus driver waves and the doors hiss gently as he closes them with his rudder-stick, and the bus rumbles off creaking and roaring, and we disperse, and this happened every weekday for 10 years in our family, what with three kids in the school up the hill, to which you could actually walk, although it was amazingly steep, and climbing the Matterhorn was easier than walking to school, especially if you were weighed down by an immense backpack and a precious school project and a disputatious kid brother.

Never was time parsed so meticulously to the nanosecond as it was with The School Bus Schedule, and never in history were there children who cut it any closer than our children, who each began their elementary school careers by sensibly arriving early to the bus stop with a parent or even two sometimes, but soon enough they mastered the art of sprinting uphill with seconds to spare before the bus grumbled to a halt at the bus stop, despite their father’s incessant testy advice to leave themselves room for error and accident and unforeseen misadventure, such as replacement bus drivers who arrived early, or cruised smoothly right past the stop without stopping, or made a point of not waiting for laggards; and one of the children, who will go unnamed here, although it was Liam, tried for a while to time his run so that he would launch only when he heard the bus coming down the street, which caused his father to turn scarlet and have to lie down.

In the afternoon the regular bus driver, a kind and thoughtful man, simply paused as he drove down our hill, and disbursed a handful of the children into our yard, from which they scattered like sparrows to their homes in the four holy directions, and sometimes one or three would wander into our house along with our regular children, and there would be sandwiches and cookies, and the dog would sniff their backpacks for hidden snacks and leftover lunches, and sometimes lick the smallest children to see if they were any good to eat, and smell the pants and sneakers of the visitors for coded messages from their dogs, so I never did really know or care about the afternoon bus schedule.

But the morning bus schedule mattered tremendously, and I have 8:51 A.M. permanently engraved somewhere inside me, and more than once, even now, years after it mattered so, I find myself restless at 8:48 or so in the morning, and filled with the urge to issue gruff imprecations and dire warnings to small people, and hustle them out the door, and either accompany them to the bus stop or stand in the street watching anxiously, filled with amazement that whatever it is that issues life saw fit to issue those lives briefly to us, of all the people in the world who would have welcomed them with wonder and love.