Toscha Seidel made a nation fall in love with the violin 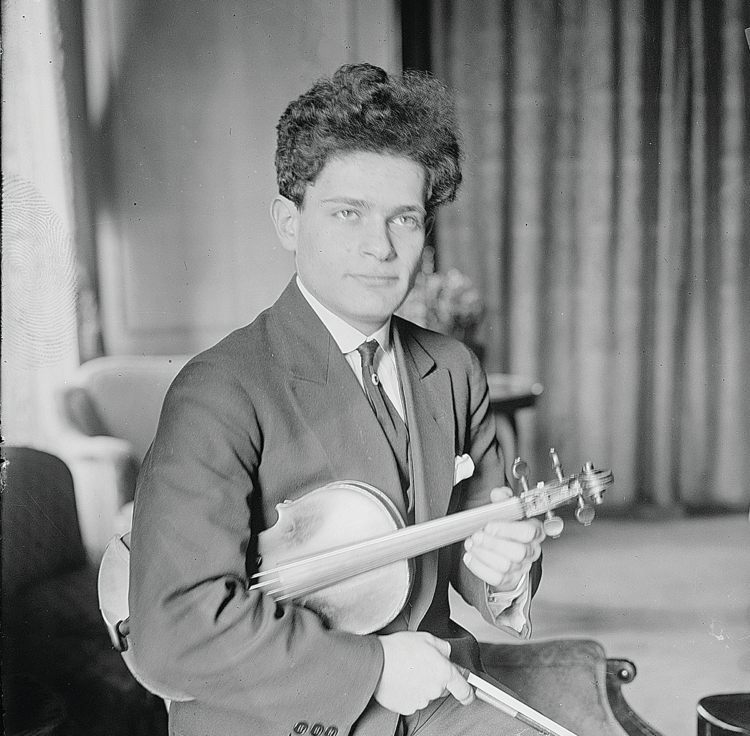 Toscha Seidel, circa 1920 (Library of Congress)

As I imagine it, the story goes like this: it’s 1938, and Albert Einstein’s finishing a talk at UCLA. He rushes from the auditorium past throngs of fawning students, his violin case and a rolled-up poster in hand. His driver shuttles him down blocks lined with palm trees, eventually letting him off on MGM’s Culver City lot. The great physicist scurries from the car onto the scoring stage used for The Wizard of Oz and interrupts a short, stocky man with woolly black hair playing “Over the Rainbow” with heated intensity on a Stradivarius. The musician is Toscha Seidel, a Jewish virtuoso born in Odessa in 1899 and the mercurial character leading Hollywood’s nascent studio orchestra scene. Seidel and Einstein next enter a room where Einstein receives an invigorating if impatient lesson on the Bach Double Violin Concerto, which teacher and student then play. When the lesson ends, Einstein unrolls the poster he’s brought Toscha as payment—on it is a depiction of the theory of relativity. Seidel’s vexed. This is legal tender?

Now, a confession: the story never happened. Not this way. The true meeting of Einstein and Seidel really took place in 1934, when Seidel was living, along with his spouse, Estelle, and their Great Dane, in a stately house in Pelham, New York. At that time, Seidel was widely known as a concert artist and from his weekly radio show on CBS, The Toscha Seidel Program. (He was also CBS’s musical director.) He did give Einstein lessons—in exchange for which Einstein gave him a hand-drawn pencil sketch depicting the phenomenon of length contraction in the theory of relativity. (Seidel’s widow presented it to UC–Berkeley’s Judah L. Magnes Museum in 1970.) As for the Bach Double Concerto, the two did perform the work together, at a fundraiser for German-Jewish scientists endangered by the Nazis.

Seidel does, however, deserve a cinematic treatment: violinists have been telling all kinds of stories about him since he first appeared in America about a century ago. He studied with the legendary Leopold Auer, whose pupils included Nathan Milstein, Efrem Zimbalist, Mischa Elman, and arguably the 20th century’s most famous violinist, Jascha Heifetz. It was rumored that Auer (unfairly) called Seidel the “devil” of the violin, a foil to Heifetz, his blond “angel.” Both emigrated to the United States, and although the two were competitive, they were colleagues, even if Seidel (and all leading violinists) lived in Heifetz’s universe. Unfortunately for Seidel, his American debut at Carnegie Hall, in 1918, came less than eight months after Heifetz’s. Auer had reportedly decided that Heifetz should appear in America first, and that performance, which wowed audience and critics alike, launched a rocketlike career propelled by technical perfection, astounding clarity, and a sense of hyperintense professionalism that made him a household name. As kids, Toscha and Jascha had performed together for the king and queen of Norway. As adults in New York, they played Ping-Pong in Seidel’s Pelham house—Heifetz won at that, too.

Seidel moved west to play for Hollywood, then, after a stint in the United States Navy Band, returned to a job as soloist and concertmaster with Paramount’s studio orchestra. He was the uncredited violin soloist for The Wizard of Oz, even if much of his playing ended up on the cutting-room floor. He provided similar services for numerous films, including David O. Selznick’s Intermezzo, Ingrid Bergman’s first major American movie, for which he recorded the famous theme. (He was also one of the violinists Charlie Chaplin would invite over to play duets.) Seidel’s Hollywood career, however, slowly eroded as contract orchestras became freelance, requiring musicians to flex their entrepreneurial muscles. According to Roy Malan in his 2004 book Zimbalist: A Life, Heiftez even requested that Seidel play concertmaster for “the master’s most spectacular concerto recordings.” That must have hurt. It’s pretty clear that Seidel knew his own limitations.

He and Estelle lived in a sizable Tudor in the Beverly Hills flats (home to the everyday wealthy). In the late 1940s, Heifetz moved above him to the hills of Coldwater Canyon, practicing in a detached studio designed by Lloyd Wright (Frank Lloyd Wright’s son). I don’t know if Seidel felt the looming presence of his more successful rival looking down on him, but it seems likely that he had a sense of impending doom before he hit 30—when he began hiding the fact that he was the unnamed violinist in radio commercials for maize products.

Violinists like to track their pedagogical lineage—which luminary their teachers, and their teachers’ teachers, studied with. I am drawn to Seidel, have been researching him since I was a kid, partly because of my own violin genealogy (I studied with pedagogical descendants of both Heifetz and Seidel). Heifetz may have been America’s violin celebrity, but it would be a mistake to discount Seidel’s importance. When Seidel performed a Brahms sonata or the Dvořák Humoresque, whether he was playing a virtuoso work such as Ernest Chausson’s Poème or the Hebrew Melody of Joseph Achron, he somehow sounded more genuine than anyone else—even if his tempos were slower by contemporary standards, even if he played with too much schmaltz, using plenty of old-fashioned portamento when shifting from one position to another. And although Seidel perhaps didn’t record the most intellectually rigorous music—he was a singing violinist, influenced by the cantorial tradition—he played with as much depth of tone and emotional intensity as anyone I’ve heard on disk.

Arnold Steinhardt, a former student of Seidel who wrote about his teacher in a 2006 memoir, Violin Dreams, once told me that Seidel’s sound, stirring and singular, was considered “hot” by both violinists and Hollywood producers. That we largely associate love scenes or depictions of the less fortunate in films—or any scene evoking tears or strong emotions—with the sound of the violin is largely due to Seidel. He was a natural talent who could turn you on to his instrument in an instant, as soon as the hair of his bow touched the strings. This was the essence of his legacy—he laid the groundwork for mainstream America to deepen its love affair with the violin.

There was something naïve about Seidel, though—something socially amiss. Steinhardt recalled that he was prone to tirades during lessons. He was more of a demonstrator than an explainer. He didn’t seem confident in negotiating or planning his career: if a well-paying gig came along, he took it. He was also somewhat immature, short tempered, and gullible, and he had trouble staying rhythmically consistent while he played—all of which could have been symptoms of the early-onset neurodegenerative disorder that eventually led to his death. Teased by rivals who eventually edged him out of the best Hollywood gigs, he was coddled by Estelle, as much a caregiver to him as a spouse. By contrast, Heifetz was stoic, self-sufficient, far less needy. Ever independent, Heifetz ended up divorcing both of his spouses and leaving nothing to his children in his will, not his homes in Coldwater Canyon or Malibu, not his priceless violins.

The Jewish émigrés who fled the Nazi-occupied countries and settled in Southern California, reinventing themselves as film composers, recognized Seidel’s talent and cherished his brand of instant sonic heat; to wit, he recorded Erich Wolfgang Korngold’s Much Ado About Nothing suite with the composer at the piano. When Seidel asked Louis Kaufman, the studio violinist who played the scene-work in Intermezzo, why he gigged in Hollywood, Kaufman replied, “No one ever asked me to play badly, Toscha, and the checks are always good.” On Intermezzo, Kaufman (no slouch of a violinist, who made an early landmark recording of Vivaldi’s Four Seasons) had the supreme challenge of trying to emulate Seidel. As Kaufman recalled in his 2003 memoir,  A Fiddler’s Tale, “Miss [Ingrid] Bergman was shown listening to [Intermezzo’s] theme in an emotionally charged scene. What a challenge for me to try to match Toscha’s unusually beautiful sound!”

It’s hard to imagine today, but Toscha Seidel and his fellow Russian-Jewish violinists were enduringly popular in early-20th-century American culture. George and Ira Gershwin even memorialized four of them in a popular song from 1922, “Mischa, Jascha, Toscha, Sascha.” In the Roaring Twenties, George Gershwin played the song at parties to great laughter, singing about those four “temperamental Orientals”: Mischa Elman, Jascha Heifetz, Toscha Seidel, and Sascha Jacobsen. All four were stellar violinists, but none had as dark a story—and perhaps as tortured an inner struggle—as Seidel did. Heifetz finished his distinguished career as an elite teacher at USC. Seidel concluded his in a Las Vegas show band before ending up in a nursing home. He died in 1962, at the age of 62.

It’s ultimately not important if a real rivalry existed between Seidel and Heifetz—although there are stories about how Seidel enjoyed some schadenfreude from an orchestra stand, when Heifetz played slightly out of tune while soloing at the Hollywood Bowl. But the two fiddlers were yin and yang, and Seidel, the more dramatic character, should not be forgotten. So if you find a Toscha Seidel recording on YouTube (he’s there, too, hiding in plain sight), keep in mind that there’s more here to what you’re hearing than a rich, singing tone with an impetuous vibrato. You’re catching part of a tale cut short too early that deserves to live on with hopeful imagination.

Adam Baer has written about music for NPR, the Los Angeles Times, and many other publications.