If every instinct you have is wrong, then the opposite would have to be right 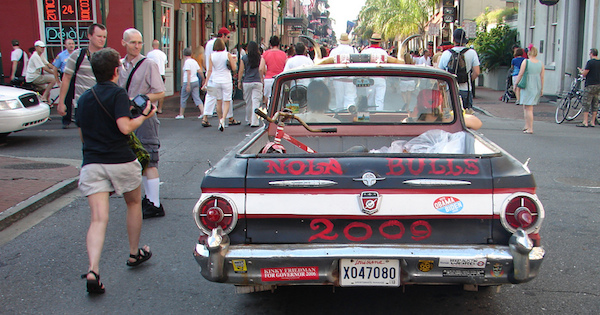 One of the rites of passage in moving to New Orleans is learning how to make a left turn.

This took me several months. When I first moved here, I discovered that many of the major streets—Canal, St. Charles, Poydras—forbid drivers from making left-hand turns, sometimes for blocks at a time. So I kept driving until I could finally make a left, and then I’d weave my way toward my destination on side streets, muttering and cursing. It seemed primitive and aggravating, further evidence of a city designed by traffic engineers with a penchant for torment.

But then someone told me that the way to make a left is simple if counterintuitive: First you make a right. In a few dozens yards there’s invariably a spot you can U-turn and proceed in the direction you want. There are no signs to indicate this, or any special lane markings. It’s just local knowledge. Lots of regions have their own way of making turns—in suburban New Jersey, where I grew up, turning left often involved a jughandle turn—but as with much else in New Orleans, sometimes you need to go the wrong way to go the right way.

The right-then-left, it turns out, is farsighted and progressive. A few years ago the American Planning Association held its annual meeting in New Orleans, during which I dropped in on a surprisingly engrossing 90-minute panel discussion on how planners were trying to fix left turns worldwide. (Don’t judge.) Significant brainpower has evidently gone into this. Consider: about one in six automobile accidents occurs when drivers are turning left. Left turns also cause bottlenecks, backups, long light cycles (and therefore more carbon emissions). And dedicated left-turn lanes consume untold acres of prime real estate. Fixing the left turn is the urban planner’s equivalent of landing someone on the moon.

At the APA meeting, I learned that going-right-to-turn-left is actually a thing. Developers and traffic planners in new and expanding communities are increasingly embracing this approach. It’s called the “median U-turn” or “boulevard turnaround” or (sometimes) a “Michigan left.” There’s also a variation involving small rotaries known as the “bow-tie left.” This is what I’ve been calling our local maneuver when describing it to visitors because it seems most suited to the city. (There’s also a “seersucker straightaway,” although as yet it’s a term without a definition.)

I like that New Orleans often finds itself in the vanguard simply by adhering to traditions. The St. Charles streetcar line, with its iconic 1920s streetcars, is the oldest continuously operating system of its kind in America. Granted, the cars don’t follow much of a schedule, almost always run in herds or never show up, and are hot in summer and cold in winter. But everybody still loves them and wants one—nearly 50 American cities have brought back streetcar lines in the past 15 years. (Streetcar lines are also expanding here.)

Another trend where New Orleans is ahead of the curve is the woonerf—which means “living street” in Dutch and first arose in Holland in the 1970s. (Also called “naked streets.”) The ideas is that you eliminate sidewalks and traffic lights and other guidance and simply allow cars and walkers to intermingle; eye contact and body language replace traffic signs. Where conditions permit, it’s proven hugely successful. Everybody’s more careful and respectful; accidents drop; traffic flows more smoothly.

Some American communities have lately been testing out this approach, but in my neighborhood, it’s been this way for a long while. Many of the sidewalks hereabouts have been wholly ingested by tropical foliage, or thrust upward by the roots of oaks into great slabs, like something from Caspar David Friedrich’s iceberg paintings. So we often walk in the narrow streets. Cars slow and go around us. We nod. Naked works.

Getting around by car in New Orleans is also fraught with challenges. The entire city seems torn up at the moment with construction projects that are nearly Egyptian in scale. But more so, the earth hereabouts is highly erodible, unstable and given to subsidence. As a result, many streets are rucked and corrugated, and often pocked with landmark-sized potholes. One fissure opened up a few blocks from our house a while back; someone marked it by depositing a queen-sized mattress in it, fully upright. It was scarcely visible, and it remained there for weeks. Communities everywhere employ highly engineered and often expensive “traffic calming” measures to slow cars in residential areas, such as textured surfaces and speed bumps. Here, it’s done through the traditional means of neglect. It’s cheap and effective.

Bug or feature? That’s a question I ask nearly every day. If you want to make a left, you have to go right. If you want to move forward, you move back. Sometimes what you least desire is actually what you most want.

There’s a local bumper sticker I used to see: “New Orleans: So Far Behind We’re Ahead.” I don’t see it as much these days, and this causes me a small amount of anxiety. Can left-turn lanes be next?