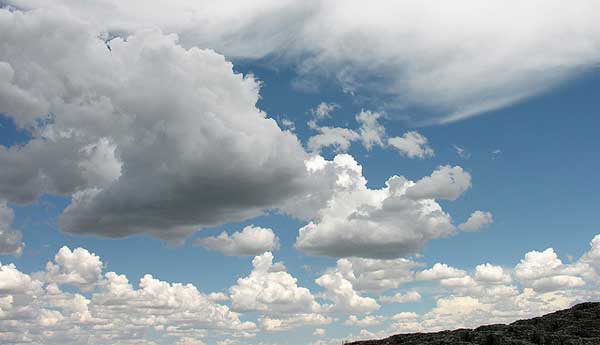 I’m riding next to the driver of the van transporting us from Taos, New Mexico, to Santa Fe. This is the 2011 summer of fire, but the Taos forest fires have been extinguished, and we are miles from the Las Conchas fire that will burn for weeks to come. Jesus music sputters from the radio. The passengers are silent. Our driver—call him Carlos—is dealing with his dead cell phone, upon which he depends for news of where to pick up the next passenger. I look out the window at the road, at the sky.

I have never seen such a sky. It is vast. (The sky covering Seattle, where I live, is never vast.) Here sky blue is deeply bright, gemlike. The clouds are thick, white, puffy heaps with distinct edges, white delineating blue. Each immense powder puff has a flat bottom the color of shadow. This sky’s a postcard, an old movie, the banal backdrop to a film’s final kiss as the camera rises. I mention the amazing sky to Carlos, and we begin speaking of places we’ve been, skies we’ve lived under.

This is a common cumulus cloud day in New Mexico. Alas, these clouds are not going to rain. They form on thermals, columns of warm air that rise from the ground as the morning sun warms the world. I consult my Cloud Collector’s Handbook and decide they are Cumulus mediocris—fat puffs as wide as they are tall. They are low-level clouds, their flat bases about a mile high.

But a few days later Seattle reverts to normal: stratocumulus clouds, the sky low and close, blanketed in dark cloudy pillows. Mountains may surround us, but they are not in attendance. It looks like rain but it doesn’t rain. (Oh, wait. Here’s a drop, no, two drops, as I walk toward my favorite café.) These clouds belong to the species Stratocumulus stratiformis, thick, monotonous, heavy looking, gray on gray, cloudlets mounting on cloudlets. It’s our signature cloud cover.

What causes a cloud? The simple answer: cooling air. The atmosphere contains water vapor, which is a gas. When air cools to the dew point, the gas condenses on a particle of dust, pollen, salt, or whatnot. Now you have a cloud droplet. A cloud is a pile of cloud droplets. A cloud atop a thermal has formed just at the point where the column of air has cooled to the dew point.

Another type is the wispy, high-up cirrus cloud, made of ice crystals.

You must want to know how I know all this. The answer is that—of course—I belong to the Cloud Appreciation Society (cloudappreciationsociety.org). I am Member No. 27,465.