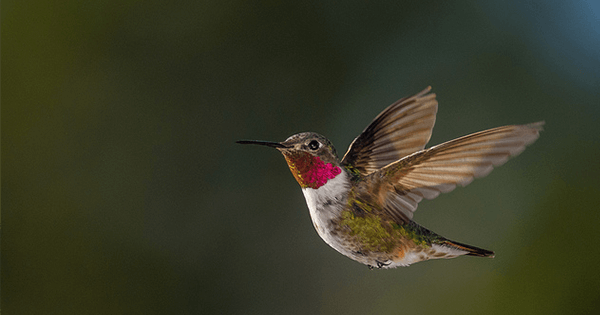 Since this short essay by Brian Doyle was published in the Scholar 15 years ago, it has been read hundreds of thousands of times on our website and often borrowed for classroom use. It is the lead piece in a just-published collection of Brian’s essays called One Long River of Sound: Notes on Wonder. Brian died at the age of 60 in 2017.

Each one visits a thousand flowers a day. They can dive at sixty miles an hour. They can fly backwards. They can fly more than five hundred miles without pausing to rest. But when they rest they come close to death: on frigid nights, or when they are starving, they retreat into torpor, their metabolic rate slowing to a fifteenth of their normal sleep rate, their hearts sludging nearly to a halt, barely beating, and if they are not soon warmed, if they do not soon find that which is sweet, their hearts grow cold, and they cease to be. Consider for a moment those hummingbirds who did not open their eyes again today, this very day, in the Americas: bearded helmet-crests and booted racket-tails, violet-tailed sylphs and violet-capped woodnymphs, crimson topazes and purple-crowned fairies, red-tailed comets and amethyst woodstars, rainbow-bearded thornbills and glittering-bellied emeralds, velvet-purple coronets and golden-bellied star-frontlets, fiery-tailed awlbills and Andean hillstars, spatuletails and pufflegs, each the most amazing thing you have never seen, each thunderous wild heart the size of an infant’s fingernail, each mad heart silent, a brilliant music stilled.

Hummingbirds, like all flying birds but more so, have incredible enormous immense ferocious metabolisms. To drive those metabolisms they have race-car hearts that eat oxygen at an eye-popping rate. Their hearts are built of thinner, leaner fibers than ours. Their arteries are stiffer and more taut. They have more mitochondria in their heart muscles—anything to gulp more oxygen. Their hearts are stripped to the skin for the war against gravity and inertia, the mad search for food, the insane idea of flight. The price of their ambition is a life closer to death; they suffer more heart attacks and aneurysms and ruptures than any other living creature. It’s expensive to fly. You burn out. You fry the machine. You melt the engine. Every creature on earth has approximately two billion heartbeats to spend in a lifetime. You can spend them slowly, like a tortoise and live to be two hundred years old, or you can spend them fast, like a hummingbird, and live to be two years old.

The biggest heart in the world is inside the blue whale. It weighs more than seven tons. It’s as big as a room. It is a room, with four chambers. A child could walk around it, head high, bending only to step through the valves. The valves are as big as the swinging doors in a saloon. This house of a heart drives a creature a hundred feet long. When this creature is born it is twenty feet long and weighs four tons. It is waaaaay bigger than your car. It drinks a hundred gallons of milk from its mama every day and gains two hundred pounds a day, and when it is seven or eight years old it endures an unimaginable puberty and then it essentially disappears from human ken, for next to nothing is known of the the mating habits, travel patterns, diet, social life, language, social structure, diseases, spirituality, wars, stories, despairs and arts of the blue whale. There are perhaps ten thousand blue whales in the world, living in every ocean on earth, and of the largest animal who ever lived we know nearly nothing. But we know this: the animals with the largest hearts in the world generally travel in pairs, and their penetrating moaning cries, their piercing yearning tongue, can be heard underwater for miles and miles.

So much held in a heart in a lifetime. So much held in a heart in a day, an hour, a moment. We are utterly open with no one in the end—not mother and father, not wife or husband, not lover, not child, not friend. We open windows to each but we live alone in the house of the heart. Perhaps we must. Perhaps we could not bear to be so naked, for fear of a constantly harrowed heart. When young we think there will come one person who will savor and sustain us always; when we are older we know this is the dream of a child, that all hearts finally are bruised and scarred, scored and torn, repaired by time and will, patched by force of character, yet fragile and rickety forevermore, no matter how ferocious the defense and how many bricks you bring to the wall. You can brick up your heart as stout and tight and hard and cold and impregnable as you possibly can and down it comes in an instant, felled by a woman’s second glance, a child’s apple breath, the shatter of glass in the road, the words I have something to tell you, a cat with a broken spine dragging itself into the forest to die, the brush of your mother’s papery ancient hand in the thicket of your hair, the memory of your father’s voice early in the morning echoing from the kitchen where he is making pancakes for his children.