Let Me Tell You a Story

Audiobooks to disappear into Any list of audiobooks I have loved must begin with a tribute to the woman who made me love them: Juliet Stevenson, famed actress of the British stage. I began with her renditions of Jane Austen’s novels, and then rapidly fell into a rabbit hole of 19th-century British fiction: Elizabeth Gaskell’s North and South, George Eliot’s Middlemarch, Charlotte Brontë’s Jane Eyre, Emily Brontë’s Wuthering Heights … Since devouring them, I’ve broadened my listening habits, and recommend here 11 books that might be even better when someone else is reading them to you.

The Book of Night Women by Marlon James, read by Robin Miles Hands down the best audiobook I have ever listened to: this novel should only be heard, not read. Robin Miles is transcendent, making the Jamaican patois of Marlon James’s epic come alive. On a Jamaican sugar plantation, the slave girl Lilith falls in with a coterie of enslaved women plotting an island-wide revolt pull, but she refuses to be the heroine or the villain that we—or the Night Women, or the white slave owners—want her to be. A few months ago, I discovered that my local library stocks all of Toni Morrison’s audiobooks, read by the author herself. I put them all on hold in January, and like a gift from beyond the veil, they started trickling in when our stay-at-home order hit. I’ve already listened to The Bluest Eye, Beloved, and Love—Sula arrives this week! Sigrid Undset won the Nobel Prize in Literature in 1928 on the strength of this saga set in medieval Norway—a tale that ranks alongside Anna Karenina in its gorgeous portrayal of flawed humans winging their way to tragedy. Beloved in the original Norwegian, the novel suffered from an archaic, bowdlerized 1920s translation that kept it off English bookshelves until Tiina Nunnally’s nimble 2005 translation righted a historic wrong. This audio edition is a great way to while away 45 hours in quarantine. Speaking of Anna Karenina … the actress Maggie Gyllenhaal’s performance of Tolstoy’s classic, in the Constance Garnett translation, is superb. Listening to this audiobook was my first encounter with the novel, a work that reminds you that classic literature can also be a page-turner. I have a weakness for Irish novels, particularly the recent spate of stories from the likes of Colin Barrett and Sally Rooney. Sara Baume’s debut is a moving portrait of a misfit man and his dog during a difficult season of their difficult lives. Dark, moving, sad, and angry—this one made me cry. Another beloved book made even better by an incredible reading from Adjoa Andoh, who ranks alongside Juliet Stevenson in bringing individual characters alive (especially the ones you want to smack upside the head). Adichie’s novel is the story of childhood sweethearts Ifemelu and Obinze, who leave dictatorial Nigeria for separate lives in the West and return years later to a newly democratic Nigeria—and each other. But the novel is one of those rare beasts that wrangles all the big social questions affecting characters’ lives—class, culture, immigration, racism—into a compelling, messy story that pulls you in as it makes you peel back the layers of your own life.

The Neapolitan Novels by Elena Ferrante, read by Hillary Huber I will never turn down an opportunity to induct more people into the cult of Ferrante—if my love for these books were a virus, you could say I had infected a score of people so far. Words can’t adequately sum up how much these books have moved me, so let me just say: believe the hype. They’ll change your life. Plus, if you listen to them on tape, you’ll know how to pronounce all the Italian names correctly! Most years I try to read at least some of the Booker Award nominees, and sometimes the only format available from the library is audiobook. That turned out to be the case for this unsettling debut, a fever dream of a novel about a world that may or may not be our own, now or in the future. Sisters Grace, Lia, and Sky live with their family, cut off from the world, until three strangers wash ashore and shred the lies holding their lives together.

H Is for Hawk by Helen Macdonald, read by the author 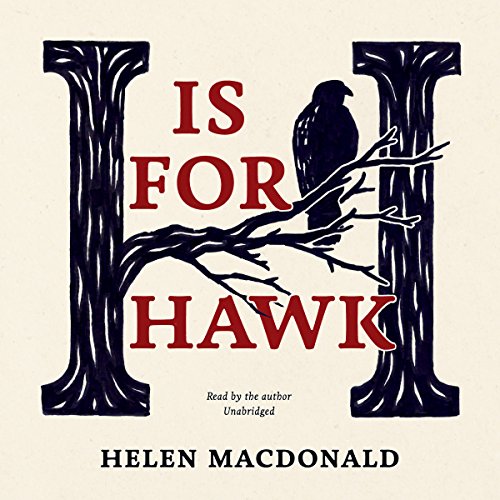 On Earth We’re Briefly Gorgeous by Ocean Vuong, read by the author Vuong’s semi-autobiographical novel describes a young man struggling with first love and his family’s past. The author is known primarily as a poet, and a lyrical quality informs his tender reading. Now in his late 20s, Little Dog is writing a letter to his mother, who raised him alone after leaving war-torn Vietnam, as he tries to sort out who he is and what his place is in a violent, indifferent world. This novel combines several of my favorite elements of midcentury British fiction—understated scenes that nevertheless play out like high drama, sleeper jokes that hit you a line later with a bark of laughter, and endless cups of tea. It’s a lovely character study both of Mildred Lathbury, one of those “excellent women” whom society takes for granted, and of postwar Britain, somehow getting on in spite of it all. A bit like us, right now.